You follow the story of a man fleeing from the light and his fight to reach the depths of hell. Be brave as you run, jump, rides a motorcycle, rides the lightning and much more. This is no ordinary man we`re talking about, this is the Black Metal Man.

Turn up the volume and start running. 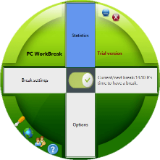